Health Conditions In The Norwegian Buhund

How prevalent is Hip Dysplasia in Norwegian Buhunds in North America?
First one must know about the two most common methods for evaluating hip joints in dogs.

​The Orthopedic Foundation for Animals (OFA) Method
The Orthopedic Foundation for Animals (OFA) is the more well-known and "AKC Accepted" option - AKC Accepted meaning that passing results will show up on AKC pedigrees.
The OFA relies on qualitative interpretations of a single radiograph of the dogs hips using the OFA seven-point hip joint scoring system. The radiograph is independently evaluated by three randomly selected, board-certified veterinary radiologists from a pool of 20 to 25 consulting radiologists throughout the USA. The dog's hips are scored Excellent, Good, Fair, Borderline (unclear), Mild, Moderate, or Severe based on these three interpretations.
Examples would be:
There are approximately 9 different anatomic areas of the hip that are evaluated.
As of December 2017, 252 radiographs had been submitted to the Orthopedic Foundation for Animals (OFA) for evaluation, here were the results:
90.1% - "Normal" (OFA Excellent, Good, Fair)
9.1% - "Abnormal" (OFA Mild, Moderate, Severe)
0.8% - "Equivocal" (OFA Borderline which means "Not clear. Usually more incongruency present than what occurs in a fair but there are no arthritic changes present that definitively diagnose the hip joint being dysplastic.")

Even if all the Norwegian Buhunds whose results came back as "Equivocal" did turn out to have dysplasia, this means that less than 10.0% of all buhunds have some level of hip dysplasia when evaluated by the OFA using the OFA's methods.

The AIS PennHIP Method
The second most common method of evaluating dogs for hip dysplasia in North America is the PennHIP method currently being provided by Antech Imaging Services. 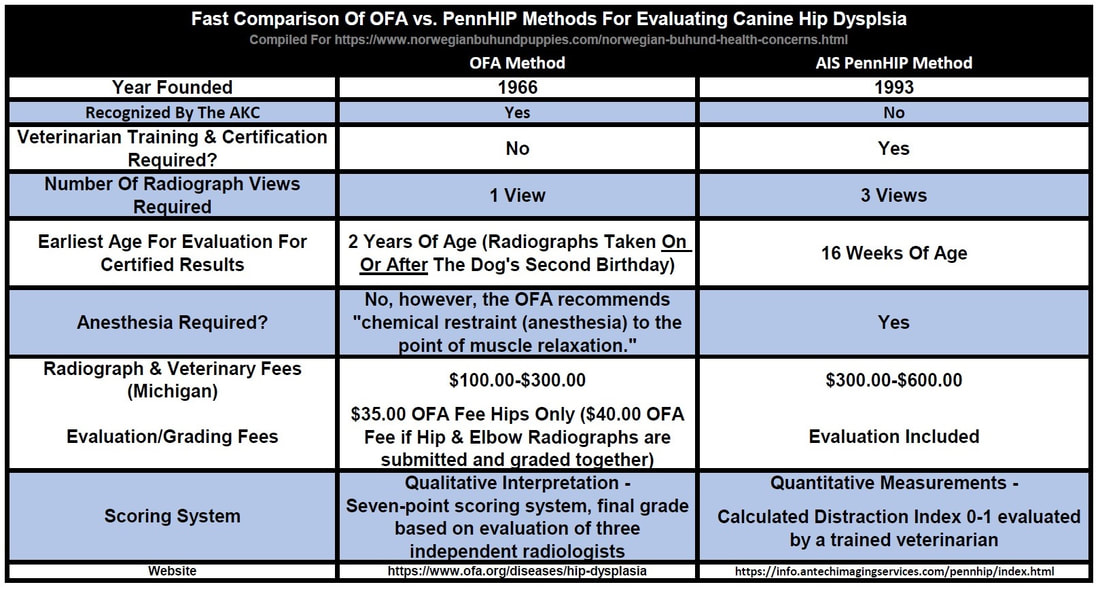 While not known to be a concern of Norwegian Buhunds in the United States, Hereditary Cerebellar Ataxia (HCA) is of concern in the United Kingdom.

Hereditary Cerebellar Ataxia can affect dogs as young as 12 weeks of age who will present with symptoms of uncoordinated movement and head tremors. HCA is progressive and will worsen with time. There is currently no effective treatment for this condition and affected animals are often euthanized based on welfare concerns.

Researchers at The Kennel Club Genetics Centre at the Animal Health Trust (AHT) have identified a recessive mutation causing Hereditary Cerebellar Ataxia in the Norwegian Buhund. A dog must inherit two copies of the mutation, one from each parent, to be clinically affected by Cerebellar Ataxia.

A DNA test will be available from the AHT DNA testing service beginning Monday, December 4, 2017.

The DNA test for Cerebellar Ataxia identifies if a dog is clear, a carrier, or is affected.

CLEAR: These dogs have two copies of the normal gene and will not develop Cerebellar Ataxia as a result of the Cerebellar Ataxia mutation being tested for, although the AHT cannot exclude the possibility that they might develop a similar condition due to other causes or the effect of other unidentified mutations.

This DNA test allows breeders to avoid producing litters affected by this disease by ensuring that one of the breeding pair is clear of this mutation.